In designing the Toscanini interface, I used the Texas Instrument EZ430 Chronos development kit to record accelerometer information. The watch is simply an enclosure for the CC430 system, complete with a 3-accelerometer array in XYZ configuration, pressure sensor, and temperature sensor. For an extra $50, they’ll throw in an extra peripheral that can monitor heart rate.

Upon opening the box, the first thing the user will notice is a piece of paper proclaiming that the watch is a development kit, and therefore still considered ‘experimental’ technology.  This is the first sign that the device is not for technological laymen. After plucking the device out of the box and removing the protective plastic, it’s relatively easy to get turned on and the time set. The device comes with two USB dongles, one for programming and debugging the microprocessor and another for receiving transmitted data. 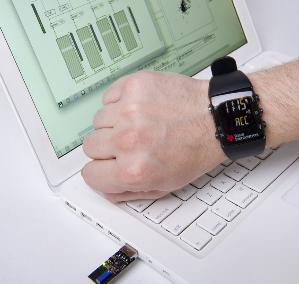 Again, this is not an every-day watch that also has cool geeky features. The EZ430 chronos is a development kit, meant for techies who are interested in learning about microprocessors and physical interfaces, hackers, and technologically advanced users with active/athletic needs. The watch itself doesn’t keep time very well, and it’s not a fashionable device. Clearly not a good gift for a geeky friend in need of a time piece, but as it can be strapped to a users wrist, it’s the perfectMIDI controller, golf swing analyzer, andpower point presentation tool.

I personally enjoy the design of the watch, though it is fairly bulky. The buttons, 3 on one side and 2 on the other, are difficult to reach and sometimes aren’t very responsive. The system itself is not necessarily an elegant design but it is functional and simple. The included USB dongles do not have their own encloses, and are very fragile, which can be a bit disconcerting especially when trying to use the device on the fly. Overall, it is designed to be useful and for ease of use, and is a wonderful tool for prototyping interfaces and firmware, but not something that should be passed off as worthy of  the technology consumer market.

Moving on to how the device works, I have devised five guidelines for to judge whether or not it is ‘good’.

The user has to wear the device, and sometimes perform sensitive tasks with it on. In all, the device is wearable, but not exactly comfortable. I tend to take it off after a few hours.

2. Does the hardware work?

The buttons are mostly reliable, but after opening the back of the watch to access the microprocessor chip for reprogramming, they will never, EVER work the same.

Connectivity isn’t an issue, just plug in the dongle and press the watch button. And even though the transmission is done over RF, the range allows you to be over one hundred feet from your computer (I’ve tested it at approximately sixty with no dropout).

4. Are the accelerometers accurate?

The device is equipped with a MSP430 microprocessing chip with integrated <1GHz wireless transceiver. The chip is reliable, and broadcasts reliably with very little latency.

If you can use a screw driver to remove the backing of the watch, have the ability to attach the chip to the programming module and insert it into a USB drive, then you can hack the watch. Well, as long as you know how to write C code, but if you don’t, then why are you hacking and not reading?

Overall, I think the device is quite useful for those in the target market, but only at first. After having designed the Toscanini interface using this watch, I couldn’t move forward re-selling these devices as part of the Toscanini system. At a certain point one desires blu-tooth transmitting, if not only for easier pairing with Apple machines. The design could also be slimmer, but then the price point would be higher. While the device has been instrumental in the design of the interface, it has slowly started to result in poor responses during demonstrations.

Luckily, Bill Geiser has started another venture, dubbed the MetaWatch, which promises to be the next best thing in wearable technology. Hopefully I can get my hands on one soon to see how the two compare.